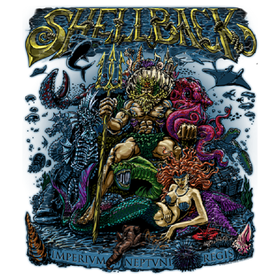 Shellback
/ˈSHelˌbak/
noun
informal•North American
noun: shellback; plural noun: shellbacks
1. an old or experienced sailor, especially one who has crossed the equator.
Pollywog or Shellback: The Navy’s Line Crossing Ceremony Revealed
by David Moore Published: March 25, 2013
Line Crossing Ceremony
Contributor: C. Peter Chen
The open seas had been a subject of myths and legends since the beginning of seafaring. Mariners of the ancient times made animal sacrifices to Neptune to please him, asking for protection from the monsters and storms. Meanwhile 15th Century explorers pondered what lay beyond Northwest Africa, at the same time both looking for something to ease their fear of falling off the edge of the world as well as tokens to display their maritime achievements. Somewhere along the line, the line crossing ceremony was born. When a sailor crossed the equator for the first time, sailors who had previously crossed the equator tested them for their capability to endure the long voyages, and at the end of the ceremony inducted them into a fraternity of seasoned sailors. Since then, other similar ceremonies were conducted when other lines such as the Arctic Circle or the International Date Line were crossed by sailors for the first time.

The tradition of the line crossing ceremony lived on into the WW2 era, and for many navies in the world at the time, it constituted a rite of passage for sailors. In the British Royal Navy and the United States Navy, for example, Pollywogs who had not yet crossed the line transformed into Shellbacks with the ceremony, entering a brotherhood of trusty sailors. The ceremony traditionally was presided over by a Shellback dressed as King Neptune, ruler of the high seas; other Shellbacks might dress as the king's court. As popularly known, the ceremony involved the embarrassment of Pollywogs for the entertainment of Shellbacks. Pollywogs often had to run through a gauntlet of various obstacles, then swear loyalty to King Neptune by kissing his signet ring and/or his bare foot.

In late Nov 1936, when American cruiser USS Indianapolis crossed the Equator with President Franklin Roosevelt aboard, even the leader of a nation was not subject to exemption. Roosevelt was made to plead his case before a seasoned sailor who dressed up as King Neptune, and had to go through some degree of embarrassment before he was granted the status of a Shellback. Like most sailors who went through this rite of passage, Roosevelt was given a certificate to show his status as a trusty Shellback.

Men who crossed the equator and completed the ceremony often received a certificate to commemorate the event. Decorated by drawings of mermaids and sea serpents, Roosevelt's certificate read:

BE IT KNOWN, That we hereby summon and command you

Now the Commander in Chief of the Army and Navy, to appear before the Royal High Court and our August Presence on the aforesaid date at such time as may best suit OUR pleasure under penalty of eternal pickling.

You will accept most heartily and with good grace the pains and penalties of the awful torture that will be inflicted upon you to determine your fitness to be one of our Trusty Shellbacks and answer to the following charges:

CHARGE 1. Disregard of the traditions of the sea.
Specification: In that Franklin D. Roosevelt, having, for many years sailed the high seas and bounding main, entirely through kindly assistance, toleration and consideration of his Majesty Neptunus Rex, has, for lo these many years, failed to appear in person to show allegiance to his Royal Highness, thereby masquerading as a man of the sea, and by this utter disregard added insult to other previous crimes.

CHARGE 2. Taking liberties with the piscatorial subjects of His Majesty Neptunus Rex.
Specification: In that, Franklin D. Roosevelt, having taken liberties with the denizens of the Realm of Neptunus Rex, by maliciously removing them from the depths of their recognized habitat, has permitted these acts to be publicized by print, town crier, and all other means of shameless publication; and, furthermore, has exaggerated this crime by the public humiliation of the greatest of these creatures of the sea, by stuffing them full of sawdust, and placing them in a position of eternal disgrace in a national museum where the eyes of all mortals may regard their pitiful and ignoble plight.

Disobey this summons under pain of Our Swift and Terrible displeasure
Our Vigilance is ever wakeful, Our Vengeance is Just and Sure

Modeled after the British Navy, the Japanese Navy had its version of the equator crossing ceremony as well. On 20 Jan 1942, the Japanese Army South Seas Force crossed the equator at 0500, the first group of Japanese Army soldiers to cross the line in the nation's history. Toshio Miyake, a newspaper correspondent traveling with the troops, later described:

"On the day we crossed the equator, all the men, fully armed and equipped, assembled on deck. 'At this time, when we are about to... advance into the southern hemisphere, we shall pay our respect toward the Imperial Palace,' said the commander toward his assembled subordinates. Solemnly, and with overflowing emotions, the men presented arms toward the north."

Such events were open to controversies, however. Line crossing ceremonies were sometimes known to become brutal hazing events, where the uninitiated often were beaten with wet ropes or fire hoses. During WW2, United States Navy ship logs often recorded additional visits to sickbays immediately after the particular ship had crossed the line. One such example was when aircraft carrier USS Franklin crossed the equator in the Pacific Ocean on 20 Sep 1944. "[A]ll hell broke loose", recalled Electrician's Mate 2nd Class Bob St. Peters. "The shellbacks grabbed pollywogs and started beating them. Actually beating them." He was one of the victims as well by members of his station, who gave him electric shocks with a hand-cranked generator as part of his initiation. Seaman 2nd Class George Sippel remembered beatings, hair shavings, tarring, painting, humiliation, and other forms of hazing, but he explained it as a rite of passage that, when all was said and done, all sailors enjoyed. He said

You've got to understand why this is done. It's all navy tradition, sure, but all we had was each other. There was no liberty, we weren't going ashore, and no one was going to see you. Your hair was going to grow back; the grease and paint will come off, and things will turn back to normal. After it was over, we grew closer and it tightened up the crew. For me it's a fond memory and all part of being in the navy. In 1995, the line crossing ceremony aboard an Australian submarine was deemed as sexual assault upon the uninitiated, and the news came before public scrutiny. Navies of the world began curtailing or banning the ceremony in the 1980s.

There were other similar ceremonies. For instance, the Dragon Ball sometimes took place on the return trip across the Equator. When sailors cross other major lines or landmarks, such as the Arctic Circle, International Date Line, or the Panama Canal, similar ceremonies were sometimes held. For many veterans of different navies, their recollections of the line crossing ceremony remain one of the most memorable experiences in their careers.