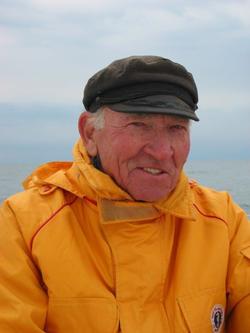 Husband, father, grandfather and great-grandfather, friend, big-hearted lover of life and the world, connoisseur of craftsmanship in all its forms, but especially of good music and wooden boats, Hugh Kenneth Drake passed away on Wednesday, August 24, 2016 in Toronto after an active, richly-lived, laughter-filled ninety-one years.  Hugh was born in 1925 in Kingston, Ontario, where he met his wife, Dorothy Knapman, whom he wed in 1950 and with whom he travelled widely, sharing a lifelong appreciation of natural and intellectual beauty and many adventures of the heart.

Hugh enjoyed a long and successful career with London Life Insurance, a career he typically and wisely never saw as an end in itself, but as a way of supporting and nurturing his two great loves: his family and sailing.  As a sailor out of Toronto’s Royal Canadian Yacht Club, he raced a Redwing 30 for many years and more recently, out of the Stoney Lake Yacht Club near Peterborough, he sailed his beloved Ackroyd dinghy, Secret.  Off the water, he served as support staff for Canada’s America’s Cup challenge in 1983, for numerous Canada’s Cup challenges, and for Canada’s sailing team at two Olympic Games.  In 2009, he compiled and edited Canada’s Olympic Sailing Legacy: Paris 1924 – Beijing 2008, a vivid and evocative commemoration of Canada’s Olympic and Paralympic achievements in sailing throughout the decades.

In 2009 he was named Volunteer of the Year by the Canadian Yachting Association and was made a lifetime member of the Royal Canadian Yacht Club.  One of his most enduring accomplishments was the establishment over the past two decades of a racing fleet of fifteen beautifully refurbished and maintained century-old Ackroyd dinghies that he found, saved from neglect and disuse and restored to their former glory on the waters of Stoney Lake.  In recognition of his efforts, he was made Honorary Commodore of the Cat Boat Fleet and given the John Fischer Award by the Stoney Lake Yacht Club.

An avid skier, Hugh and his family were among the first members of the Craigleith Ski Club, where Hugh cut a memorable and striking figure on the slopes.  An enthusiastic amateur of the piano, Hugh could also be counted on at family get togethers to knock out some Gershwin or Cole Porter on the ivories, or, in more reflective moments, even try his hand at Beethoven’s Moonlight Sonata, efforts that the family liked to dub Moonlight Sinatra.

Hugh was the loving, proud and devoted father of four daughters; Susan (Ian Masters), by whom he was predeceased, Julia (John Reardon), Christine and Sarah (Bill Tinney).  He is also survived by his wife, Dorothy, and by his grandchildren Rebecca, Keltie, Ella, Angus and Kiva and by his great-grandchildren Skylar, Frances and Olive.