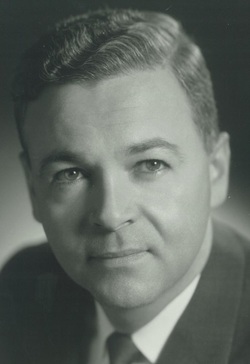 In his 90th year Doug Dyment died at the Headwaters Health Care Centre in Orangeville, Ontario.

He had driven to the country for the weekend, stopping at the Caledon Mountain Trout Club to pick up a fish he’d caught and left to be smoked. He was contemplating his first swim of the summer, the next morning with his wife Mary, but suffered a stroke in his sleep and died later that day.

For many years he was the president of Dyment Limited, North America’s leading supplier of point of purchase advertising displays. “Dyment’s” also became a pioneer in the distribution of sales materials, with a computer as large as Air Canada’s.

The firm was started by his father Philip A. Dyment in 1912. Headquartered in Toronto, by the late 1980’s there were seven branch plants in the U.S. at a time when Canadians were more familiar with U.S. branch plants in our country. P.A. was from a large family, and it was his brothers who left Canada to open and run many of those U.S. operations.

Benefitting from Doug’s leadership and vision, Dyment’s consolidated its branch plants into a state of the art mega-plant before selling the company in 1996.

Doug learned wonderful skills many from his father and uncles, which served him well as he grew the company with his brother Donald.

A formative experience for Doug was his time at Royal Roads Naval College training to be an officer during the Second World War. While colleagues the year ahead of him served during hostilities, the war ended just as he was graduating. His cohort shared a strong bond which has lasted through the decades and they were blessed not to suffer the loss of classmates in war.

Doug, as one of his grandchildren put it, “Was just the greatest guy, so loving, so positive, the best grandfather I can imagine.” And that’s pretty much how everyone experienced him, the greatest as a husband, a dad, a friend, a boss.

Douglas is predeceased by his parents Philip and Elma Belton Dyment, and his brother Don with whom he worked closely for many years.