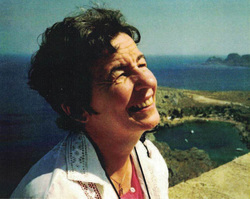 Aileen was born in York, England on May 11, 1933 to Jean and Peter Spence. Aileen and her brother Peter grew up during the Second World War in Yorkshire, England. Aileen's favourite memories were the times she and her family spent sailing on the North Sea in her family's boat Naïve. A book given to her by a wise high school guidance teacher, Joseph Lister, Father of Modern Surgery, contained sections on pioneering research that led to the prevention of disease. This led Aileen to dream of becoming a doctor. Dr. Elizabeth Aileen Clarke graduated from the Royal Free Hospital (formerly the London School of Medicine for Women) in 1957 and emigrated to Canada with her husband, John Clarke, in 1959.

In Canada she started her professional career at Princess Margaret Hospital as a research assistant, which led to her completing her Master's degree in Epidemiology at the University of Toronto in 1973. After the defense of her thesis, "the Epidemiology of Hodgkin's Disease in Ontario", she was offered a full-time position with the Ontario Cancer Treatment and Research Foundation (now Cancer Care Ontario) along with a status-only appointment as Assistant Professor at the University of Toronto. She then started her work on cervical cancer screening. Her research, published with Terry Anderson in the Lancet in 1979, showed that the Pap-smear was an effective screening procedure for cervical cancer. This study was noticed by some of the leading "Fathers of Epidemiology" and Dr. Clarke was invited to participate in the International Agency for Research on Cancer. In 1977, as Head of the Division of Epidemiology and Biostatics Dr. Clarke introduced computerized data linkage to the Ontario Cancer Registry, making it easier for researchers everywhere to get data that could help with cancer prevention research.

In 1991 Aileen was promoted to Full Professor in the Department of Preventive Mediciie at the University of Toronto, and in 1992 was elected as Medical Scientist to the Royal College of Physicians and Surgeons of Canada. Aileen officially retired from Cancer Care Ontario in 1998.

During this busy career Aileen's favourite escape was sailing and she was actively involved in the sailing community. One of her accomplishments was starting the Canadian Optimist Dinghy Association (CODA). Based on these efforts, Sail Ontario created the E. Aileen Clarke Ontario Single Handed Ranking Trophy. This award is presented yearly to the Yacht Club with the best results in single handed classes in the Ontario Sailing Grand Prix Development Series.

Aileen's outgoing and strong personality has had an impact on all those around her and she will be dearly missed by many, but mostly by her family: her three children, Felicity (Seth) Rodness, Philippa (Avi) Clarke, Richard (Andria) Clarke; 4 grandchildren, Connor Rodness, Samuel and Ruth Wasserman, Zoë Clarke.